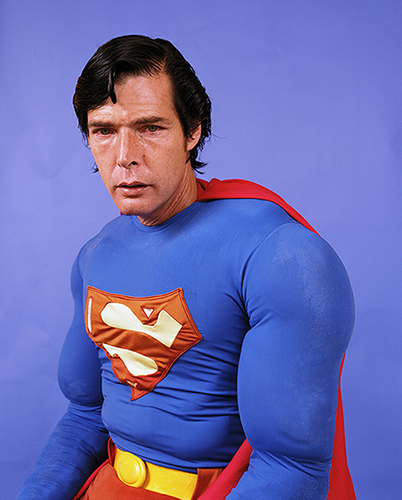 Even super heroes cry. They too feel the impact of the economic, social and cultural crisis that has the world under its spell. The ultimate bad guy. Nicolas Silberfaden photographed impersonators who try to make ends meet by roaming the streets and earn an extra buck in Los Angeles. So he explains on his website:

Due to the current economic, social and cultural crisis in The United States of America today, I have decided to do a photographic project consisting of a series of studio portraits of superhero and celebrity impersonators that live and work in the city of Los Angeles. Most of them unemployed Americans, they decided to suit up with their costumes and hit the streets, animate parties and events in efforts to make ends meet. Making them pose in their costumes against a colorful backdrop, I ask them to manifest feelings of genuine sadness – honest emotions that are a consequence of our current times. The result is a somber, striking visual image that contradicts the iconic nature of strength and moral righteousness typical in American superhero and celebrity imagery. Creating the illusion that Superman does exist – that he too was fallible and affected by America’s downturn.

Visit his website and have a look at the complete series. I find the portraits interesting. Nicolas has taken the subject of an iconic figure and downgraded it to a human level with all its emotions and problems.